Stephanie Jo Harris introduced an unconventional and compelling new series with The Poet, a dark morality tale hiding underneath an edge of your seat thriller.

Slightly twisted with a literary flair, The Poet is the first installment of a new series featuring Rebecca Paige and Jack Shelley.

When Rebecca Paige decides to vacation alone at an isolated resort in the woods, it’s a welcome break from her position as the administrator of a psychiatric hospital. Little does she know, the poet is also visiting this peaceful hideaway, and his motivation is far more sinister in nature.

On the last day of her trip, Rebecca has an unusual encounter with Jack Shelley, the man in the cabin next door. After he leaves, men with guns suddenly descend on the resort and take Rebecca and the other guests hostage.

Rebecca is accustomed to dangerous situations at work, but can that help her escape multiple armed assailants? Who are these men? What do they want? How are they connected to the man next door? Who is the poet? 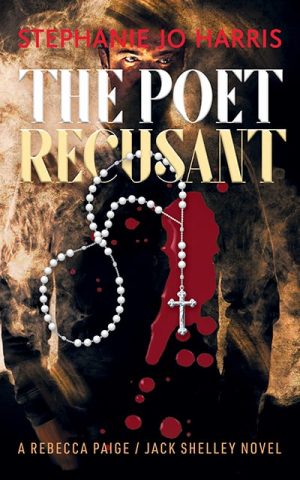 Jack Shelley and Rebecca Paige return for the second book of The Poet Series. Relentless and unforgiving, Recusant will leave readers decidedly uncomfortable, and begging for the next book in the series.

“Rebecca?” Jack walked to the bathroom and looked around. Scrawled onto the back of the bathroom door in soft pink lipstick were two things; ‘PD’ and a heart.

Rebecca was gone. He could tell by the room there had been no fight.

She would go willingly with the police. Probably even quickly, hoping they would be gone before he returned. Expecting them, understanding why they were there, and seeing no cause to disagree she would have complied. Except it wasn’t the police. It couldn’t be. The police would have waited for him.

Whoever had taken Rebecca wanted her alone; wanted her away from him. That meant only two possibilities; leverage, punishment, or both. Punishment.